It is time to put the kids to bed. The last big rose chore before we get to put our feet up and enjoy the rose catalogs needs to be done by about the first week of December. A general rule is to wait until there have been two real (not just a couple of hours) freezes below 28degrees F. Protect too soon and the bush will not have time to gear up its internal winterization mechanism.


The biggest misconception the general public has about rose care is that roses should be pruned in the fall. Since pruning encourages a bush to grow, and new growth will be killed by cold weather, obviously you do not want to fall prune. You may prune later on in the winter if the bushes have gone dormant although that seems to not be happening in Nashville in the last few years. An exception to the rule would be an unusually tall rose which might need to be pruned if a hard freeze with icy winds is expected. Then it is acceptable to trim the long canes to waist-high, although staking or tying them together would also prevent their being rocked out of the frozen ground. 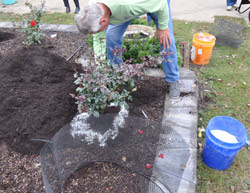 Roses on their own roots such as miniatures, shrubs and old garden roses generally need little protection. A shovel of compost is a good idea and should suffice. Roses grafted onto a root stock such as hybrid teas and floribundas are a different story. The knot (bud union) formed by the graft must be protected or the rose will likely die. Hybrid teas and floribundas on their own roots are supposed to require less protection, but I believe these varieties of roses are still more tender than, say, the minis, and still need protection.

One of the main purposes of winterization is to keep the area surrounding the rose at a consistent temperature. Tennessee has many warm spells during the winter months as well as some very cold times. Our poor roses are hopelessly confused as to whether to grow or not without some type of blanket.

You can, of course, plant the bud unions of your roses a couple of inches below ground level, as some excellent rosarians do. This keeps you from having to do much for the winter. There are pros and cons on this. Most Tennessee rosarians go for ground level planting of the bud union as do I.

The first thing to do is to check the pH of each bush and add lime (or sulfur if needed) to adjust the pH to 6-6.5. For a complete explanation of pH, click here for my extensive article which will give you amounts of lime or sulfur to adjust your pH.

My two rose beds are already covered with about 3-4” of pine needle mulch. Over the summer, some needles break down into a layer of more compact broken needles. To winterize, I first clean up any dead leaves from the beds and any obviously diseased leaves from the bushes. One-two cups of Mills Magic Rose Mix,a completely organic fertilizer, is scratched in around the drip line. I then scrape some of the broken down layer of pine needles over the bud union and put a shovel full of composted manure over that. (A good packaged manure is Black Kow from Lowes.) The whole bed is then covered with another 6” or so of pine needles. I take particular care to be sure that whites and yellows, and any other bush that I know is very winter tender, are well covered. I do not strip all the leaves off my bushes. I believe that a leaf that has any life in it at all should stay on the bush until it is ready to fall off of its own accord. In a hard winter, that happens, and the wind blows them away by spring, saving me a lot of work.

The pine needles stay on very well thru the winter and I think that covering the whole bed serves to keep the temperature consistent. My beds are not raised, however, and raised beds would increase their vulnerability to the cold. This should be considered when you choose the method to use in your own garden.

But, you ask, what happens to the canes above the mulch? In a hard winter all growth above the mulch dies. However, as long as the bud union is viable, new growth will start rapidly and soon catch up to that of roses more aggressively protected. 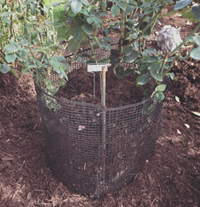 Many rosarians use collars around each rose filled with dirt, manure, compost, leaves, etc. These collars are made of chicken wire, roofing felt or newspaper and are 12-18” tall.

Hilling up is another tried and true method. Dirt is brought in and hilled up over each rose for 10-12”. Do not scoop up dirt that is already in the rose bed as that would expose the roots.

Styrofoam cones may be used, but care must be taken to open the tops on warm days so that the roses will not “cook”. Cones have also been associated with fungus problems, not to mention their cemetery look.

Winterizing Other Types of Roses

According to a June, 2004, article in the Rose Leaf by Don Gill, he uses an 18” high tar or felt-paper collar around each bush filled with 18” of composted manure or other good soil. His roses are tall but already staked so he never cuts them back. The collars are removed in the warmer days of February and rain is allowed to wash the soil gently away. He puts the soil back if extreme weather is forecast. He also never strips his leaves.

If grafted, protect grafts with mulch. Very little other care is needed. It is almost impossible to protect the canes. Believe me, I tried!

Store them in a sheltered place covered with leaves or pine needles or bring them into an unheated garage. I bury one potted hybrid tea and last year I also buried a few pots of minis in an empty rose bed space. Jack Wedekind is a NRS Master Rosarian whose entire rose garden is in pots. For Jack’s article on how he winterizes containers, click here.

They have two bud unions-one at the top and one at the bottom. They are almost impossible to protect unless they can be brought into a garage and even then perhaps wrapped in a blanket for really cold spells. They can also be turned on their sides and completely buried.

That covers most of the roses you might have in your garden. If you have time, a final fungicide and insecticide spraying is a great idea before you mulch for the winter. Don’t let the weather sneak up on you, watch for the two freezes and get those kids in bed on time!

This has been the method of choice for many excellent rosarians for the last few years. They clean the beds and spray, but add no extra mulch. There is nothing wrong with this at all as long as you realize that you are gambling on fickle Tennessee weather. The spring of 2008 had a devastating April freeze which killed many roses, particularly the Fortunianas. If you mulch and keep the mulch nearby in April, there is a greater chance that you can protect your roses in case of a late freeze. If not, you get to buy new roses!

Maybe my last bouquet 💐 until next May. Cosmos,

Location change of our Sunday Oct 9th meeting is a

Our rose garden at cheekwood is looking BEAUTIFUL!

Love this rose. Named "Miranda Lambert" so you kno

Our member, Linda B, won KING with her Crescendo!

Mister Lincoln rose cutting grown by one of our me