During the COVID-19 pandemic in the spring of 2020, most of the Nashville Rose Society members followed the Tennessee governor’s and the Nashville mayor’s orders to shelter-in-place. For most of us, this gave us more time to enjoy the company of our gardens. We were able to tend to our roses during a time when they need so much attention – uncovering mulch, pruning, feeding and watering, as well as weeding.

Abiding by the state and local government official’s orders, Cheekwood Estate and Gardens was closed to the public in March, which included the volunteers who tend to the Rose Study Garden. The Garden had to shelter-in-place all alone. The roses in the garden depended on the heavens for rain (which fortunately we did have plenty), but they did not get pruned (other than what the deer helped with), mulched or fertilized.

Doing in June what should have been done in March…

In June, Cheekwood was finally able to allow a limited number of volunteers into the Garden to start working. On June 1, Bob Bowen, Rose Study Garden Manager, and Ron Daniels, NRS 2020 Co-president, began the weeding and cleanup process. Imagine what your garden would look like by June if it had not been tended to all spring.

Ron indicated that in over twenty-five years of growing roses, he had never experienced a situation were a rose garden had no work done until early June. The plants themselves were overgrown to the point that you could not walk between many of them. There were few blooms, and because no deadheading had been performed, the spent blooms had gone to seed.

On June 8, nine volunteers worked a total of 32 1/2 hours in the garden. As fate would have it, it was one of the hottest days of the year, with a heat index close to 100 degrees.

During the course of the workday, the roses were aggressively pruned with cordless hedge trimmers. Bob got up on the roof of the storage building to prune the climbers. Mulch was added, the roses were fertilized, and the automatic drip irrigation system was set up to run. Out of over fifty roses, only a couple of bushes did not make it through the winter and had to be replaced.

And as all gardeners know, it takes twice as long to do the clean up as it takes to do the gardening. Because the roses were cut back so dramatically, the biggest and most time consuming challenge was raking up and disposing of all the canes. Initially, a tarp was used to pull the canes over to a dumpster, but it did not take long before the dumpster was full. After that, the canes were chopped up to fit into large lawn/trash bags and the Cheekwood garden staff disposed of them.
Ron Daniels’ mantra is “Water, Water, Water” – roses must have water. The next week, June 17, volunteers installed a new irrigation system to ensure that the Garden is properly watered. The Orbit B-hyve Wi-Fi sprinkler timer uses a programmable timer with the remote Wi-Fi capabilities allowing the Garden managers to control the timer with their Android or iOS app, or from their computer. It also can be set up to adjust watering based on local weather to avoid water waste and deliver the right amount of water to the roses.

Now that the Rose Study Garden has been pruned, fertilized, mulched and is getting properly watered, it is on it’s way to recovering from the spring of neglect. Roses are resilient, but they do require attention to produce the beautiful flowers that we love. The Garden will soon rebound with an abundance of roses that we are used to seeing.

Our thanks go out to the brave souls who survived the heat to get the Garden on its road to recovery:
Bob Bowen, Ron Daniels, John Wendler, Sandra Frank, Christina Cassidy, Leslie Ruder, and Jill Garabedian.

Finally, we have our garden back…

By the end of July, 2020, the garden is starting to rebound. With love, attention, and plenty of water in the over 100 degree heat index, the roses are blooming. Cheekwood is now open for visitors to enjoy the Nashville Rose Society Study Garden. Most would never realize the stress the garden endured while it was Sheltering-in-Place. 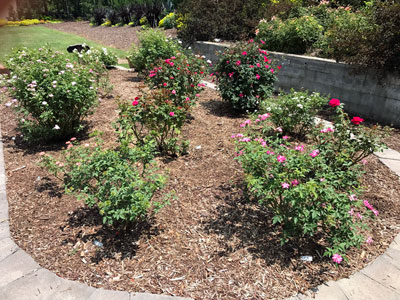 Maybe my last bouquet 💐 until next May. Cosmos,

Location change of our Sunday Oct 9th meeting is a

Our rose garden at cheekwood is looking BEAUTIFUL!

Love this rose. Named "Miranda Lambert" so you kno

Our member, Linda B, won KING with her Crescendo!

Mister Lincoln rose cutting grown by one of our me